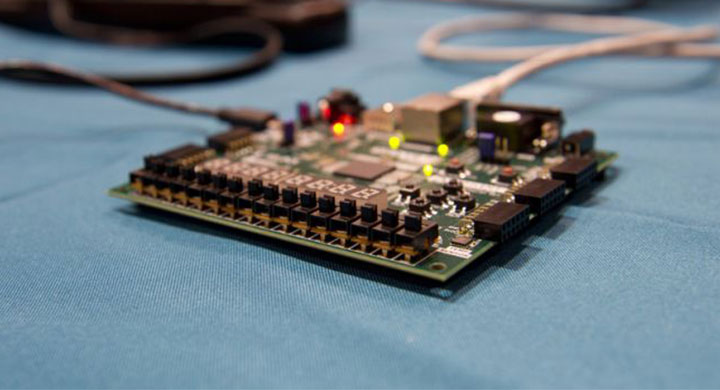 The event, founded in 2008 by NYU Tandon Professor of Electrical and Computer Engineering Ramesh Karri and his students, is a cornerstone program of NYU’s hardware security group. Part of NYU Center for Cyber Security and comprising researchers at NYU Tandon and NYU Abu Dhabi, the group has become a leading force in microchip security.

The ESC for the first time includes the Indian Institute of Technology, Kanpur (IIT Kanpur). Finalists will travel to IIT Kanpur or NYU Tandon to compete before a panel of security experts during CSAW (November 10-12, 2016).

The seven finalist teams are:

The ESC tournament employs a “red team, blue team” format that mimics real-world attacks. This year’s challenge was designed by a team of top NYU security faculty and students mentored by Assistant Professor Michail Maniatakos and Nektarios Tsoutsos, a computer science doctoral candidate studying under Maniatakos at NYU Abu Dhabi. The contest requires the competitors to defend against one of the most common security bugs: memory corruption, by which a hacker subverts a microchip by changing critical data in its memory. The teams will attempt to enhance a basic chip design so that memory corruption can’t harm the system.

"The Embedded Security Challenge at CSAW is not just about academic bragging rights,” said Karri. “Because the attack and defense models and ideas that ESC generate apply to the real world — real scenarios, real technology, and real threats — they can be used to generate security tools for the chip design process and tactics for defending against theft of chip design and sabotage during fabrication."

The preliminary event required teams to design their own vulnerable computer programs, show how to exploit those vulnerabilities, and offer hardware defensive techniques to prevent such attacks.

About the NYU Tandon School of Engineering
The NYU Tandon School of Engineering dates to 1854, when the New York University School of Civil Engineering and Architecture as well as the Brooklyn Collegiate and Polytechnic Institute (widely known as Brooklyn Poly) were founded. Their successor institutions merged in January 2014 to create a comprehensive school of education and research in engineering and applied sciences, rooted in a tradition of invention, and entrepreneurship and dedicated to furthering technology in service to society. In addition to its main location in Brooklyn, NYU Tandon collaborates with other schools within the country’s largest private research university and is closely connected to engineering programs in NYU Abu Dhabi and NYU Shanghai. It operates business incubators in downtown Manhattan and Brooklyn and an award-winning online graduate program.